In June 2016 IISR will present the book release of Asma Lamrabet, which carries the title “20 Questions and Answers on Islam and Women from a reformist vision”. For centuries, the question of “women in Islam” has been held hostage by two opposing but equally radical perspectives: one, rigid Islamic conservative; the other, western, ethnocentric, and islamophobic. 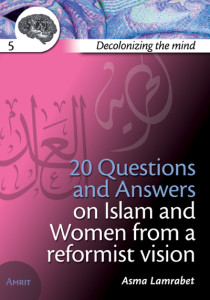 In 20 Questions and Answers Asma Lamrabet criticizes with both perspectives from a reformist approach. She takes the propositions of these perspectives and goes back to the sources – the Qur’an and the Hadith – to analyse the different arguments and weight them against the interpretations. Questions the book deals with are for instance:

Asma Lamrabet is director of the Studies and Research Centre on Women’s Issues in Islam of Rabita Mohammadia des Ulemas located in Rabat, Morocco since 2011.