Decolonizing the Mind is a theoretical framework for analyzing important scientific and social matters from a decolonial perspective. 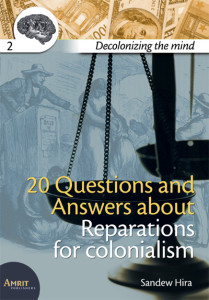 Second, the development of alternative concepts and theories that an stand the challenge of test and critique. If western science was founded on false premises, what then should the alternative foundation be?

Third, the translation of critique and alternative into policies for changing the legacy of colonialism: politically, economically, socially and culturally. Many policies of institutions are based on “scientific” knowledge. If we challenged that knowledge, naturally we will challenge their policies.

These pillars can not stand on their own. The critique of concepts and theories of Scientific Colonialism will immediate invoke the question of the alternative. The alternative is not just the antithesis of a proposition. It should have a legitimacy of its own and vested in an epistemology that goes beyond the critique.

Once an alternative is formulated then the question of power will arise, because critique is challenging the authority of knowledge. The articulation of alternatives will inevitably challenge the dominant power relations.

In DTM colonialismis analyzed as a system of oppression and exploitation that started five hundred years ago and was set up and developed in five interrelated dimensions: