Prof. Stephen Small is co-editor of the book series Decolonizing The Mind. Here is a list of his activities as series-editor in the coming period. 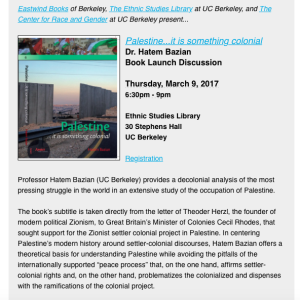 On Thursday, March 9, 2017, Professor Hatem Bazian will present a discussion of his very recently published book – “Palestine…. It is something colonial, published by Amrit publishers in December 2016. The presentation and book launch is being organized by Eastwind Books, of Berkeley, the Center for Race and Gender, at UC, Berkeley, and the Ethnic Studies library at UC, Berkeley.  Professor Stephen Small, co-editor of the DTM books series, with Sandew Hira and Arzu Merali, will give the introduction to Professor Bazian’s talk at the event.

Professor Stephen Small will be in Brazil at the end of March, to give a series of lectures and to promote the book series ‘Decolonizing the Mind’.  He will give five lectures at the ‘Factory of Ideas’, a project founded by Professor Livio Sansone from the Federal University of Bahia in Salvador da Bahia, Brazil. The ‘Factory of Ideas’ is an advanced course, over two weeks, in the study of race and ethnic relations for graduate students and professors from across Brazil and the Global south. Professor Sansone founded the course more than 20 years ago to promote the study of these issues. Since that time more than several hundred students from across Brazil and the Global South, as well as the west, have attended. This year’s theme is ‘Heritage, Inequality and the Politics of Culture’. Professor Small will lecture on contested legacies of slavery in Europe, with an emphasis on England, the Netherlands and Spain. He will also give a public lecture on ‘Reggae: Jamaica’s Gift of Black Consciousness to the World’. The program will take place in the historic city of São Luís/Alcântara, Maranhão, Brazil, which is nicknamed ‘the Reggae capital of Brazil.

Stephen Small will give a lecture on ‘Theorizing Black Europe, at the Federal University of Rio De Janeiro, on Thursday March, 23. The lecture be based on the analysis and data collected for his forthcoming book ‘20 Questions and Answers on Black Europe’ to be published by Amrit publishers this summer, 2017.

University of California, Consortium of Black Studies Award for preliminary research on Denmark and colonialism

Professor Small has been awarded funds to carry out several week’s preliminary research this summer, on legacies of colonialism and imperialism in Denmark. The state of Denmark (like Sweden and Norway) currently represents itself as free of involvement in colonialism and imperialism, and innocent of its violence, exploitation or legacies. But in fact, Denmark developed slavery-based plantations in several Caribbean islands for several hundred years, built fortresses on the West Coast of Africa to facilitate the kidnap and transportation of Africans into slavery, and established a colony in India.  Denmark was complicit in colonialism and imperialism as part of an international network of nations, companies and churches, that stretched across the whole of Europe, and linked Europe to Africa, the Americas and Asia.  This includes political involvement (national sovereignty, international diplomacy and the military); economic involvement (massive shipping tolls, international trade, finance and banking, along with extensive consumption of goods from imperial nations); and ideological collaborations (embrace of notions of Western superiority – racially, religiously, technologically, scientifically and with regard to ideologies of gender and the treatment of women). In addition, politicians, military personnel, Lutheran missionaries and wealthy individuals brought back from Africa and the Americas, artifacts, paintings and other material objects that are now on show in Danish museums.

This preliminary research involves visits to 15 or more museums and to a range of public and private archives to gather information and insights into the dominant narratives; and to identify data and evidence on Denmark’s past involvement. This will serve as a building block to a broader analysis of nations across Scandinavia.

This year is particularly interesting because it is the 100th anniversary of the sale by Denmark of its Caribbean possession, to the United States. So, various groups of Black and non-Black people in Denmark are pushing the state for a more rigorous public discussion of Denmark’s colonial history.